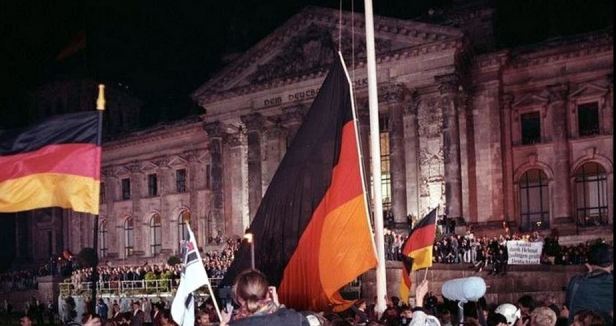 25 years ago today, East and West Germany officially reunited, bringing to an end almost five decades of division. On this special Day of German Unity (Tag der deutschen Einheit), I take a look at the process it took to reunite the two German states and how unified Germany really is a quarter century on.

Following the Second World War, Germany was divided into occupation zones by the Allies, which (with the onset of the Cold War) evolved into two rival German states; the capitalist Federal Republic of Germany (West Germany, BRD), and the communist Democratic Republic of Germany (East Germany, DDR). By 1989, however, rapid changes began taking place in East Germany, hastened by Soviet Premier Mikhail Gorbachev. Widespread discontent resulted in mass demonstrations, thousands fleeing the country as the Iron Curtain began to dissolve, and the fall of the Berlin Wall – the most potent symbol of the division of Europe in the late 20th century.

After the Wall fell, free elections were held in East Germany in early 1990 for the first time since 1933, with the public overwhelmingly expressing their desire for reunification at the ballot box. Over the course of the year, both Germanies adopted a unified currency – the Deutsche Mark, and by August a Unification Treaty (Einigungsvertrag) had been agreed by both sides to allow for the accession of the DDR to the Federal Republic of Germany. East Germany voted to dissolve itself and on the 3rd October 1990, Germany officially reunified.

On that day, 16.4 million East Germans became citizens of the newly-united Germany and five East German states were recreated; Brandenburg, Mecklenburg-Vorpommen, Saxony, Saxony-Anhalt and Thuringia. The following year, the Bundestag (the German Parliament) moved back to a reunified Berlin and Allied forces left Germany in 1994, 50 years after their invasion of Nazi Germany.

Reunification posed a huge financial challenge for the newly unified state, especially in terms of healthcare and social security provision. The cost of reunification for Germany has been estimated at over €2 trillion, with a majority of this being spent on providing social benefits for the new German citizens and on repairing and replacing the old East German infrastructure. The investment has paid off, with a policy of providing 100DM 1:1 for each East German mark triggering an economic boom in Eastern Germany. In addition, the income of Germans in the east rose from roughly 50% of their western counterparts to two-thirds, and eastern Germans now live seven years longer than before reunification took place. Even in terms of central heating in private households, the positive effects of reunification are present; in 1991, only 60% of households in East Germany had central heating, now it is almost on a par with the west at 95%.

The Solidarity surcharge (Solidaritätszuschlag) has also provided a continued source of revenue to improve infrastructure in the east, collecting some €15bn a year. Chancellor Angela Merkel, an East German herself, has praised the tax and has ruled out abolishing it when the levy is due to expire in four years time.

Whilst it is fair to say life has improved in the former East Germany significantly, eastern Germans still remain worse off compared to their western counterparts. The former DDR was hit with high unemployment in the immediate aftermath of reunification. This resulted from the work of the Treuhandanstalt, which was given the task of privatising old East German industries. 2.5 million people were laid off from some 8,500 former state-owned enterprises. Old communist industries could compete with those in the West, and unemployment in the east still remains almost double that of the west.

In addition, eastern German citizens own assets worth less than half of the average owned by those in the west; the average east German owns €61,000 in comparison to €140,000 in the west. This is partially due to the fact that real estate in the eastern regions are worth roughly half as much than that in the west. Also, the population of the former East Germany has also plummeted since 1989, with some regions suffering a drop of 30% as people left for cities in the West.

Whilst the two halves of Germany have not fully been made one, the reunited country has become an economic and political powerhouse in Europe. Some 25 years after the flag of a reunified Germany was raised outside the Bundestag, it is still apparent that there are still pages to be written in the history of German unity.