In an ongoing series on Iceland’s upcoming election on October 29th, I have taken a look at the manifestos so you don’t have to! To begin, we start with Iceland’s largest party, the Independence Party, which currently leading in the polls.

Before we look at the party’s policies, here’s a brief history of the Independence Party…

The Independence Party is a centre-right party and is often the largest party in the Icelandic parliament. Since Iceland became a republic in 1944, the Independence Party have been the largest party or joint-largest in every election bar one, 2009. As a result, the party has served in government in 54 of the 72 years since 1944, and is Scandinavia’s most successful right-wing party.

At the last election, the party won 26.7% of the vote, claiming 19 seats in the ‘Althing’, the same number of seats as its coalition partner, the Progressive Party. This was up 3% (and 3 seats) on its performance in 2009, which saw it lose a third of its support. 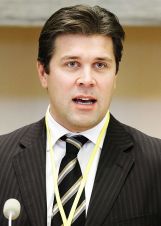 Unlike the left-wing parties, the Independence Party has benefited from being a catch-all party by not leaning too far to the right. As a result, the party enjoys a broad base of support, with particular backing from the country’s large fishing community, as well as the middle classes and those on high incomes.

Its current leader is Bjarni Benediktsson, who was elected to the post only a month before the party’s disastrous performance in the April 2009 elections. In the current administration, he serves as minister for Finance and Foreign Affairs.

However, the party suffered a significant blow earlier this year when a group discontent with the eurosceptic policies of the Independence Party broke away and formed a new party, ‘Revival’, this year. Revival is polling at 10% in recent polls, with means it looks set to win a handful of seats in parliament.

The Independence Party is more liberal than other right-wing parties in Scandinavia, supporting a laissez-faire approach to the economy but also making significant advances for LGBT rights while in power. The party was also the only constant advocate for ending Iceland’s prohibition on beer, which only came to an end in 1989.

Tomorrow, we take a look at the Independence Party’s main challengers, the Pirate Party, which have surged in support over the last three years…