On Friday, North Korean and South Korean Olympic athletes walked together under a unified Korean flag at the Opening Ceremony of the Winter Olympics in Pyeongchang. This, along with the offer of talks between the two countries by North Korean leader Kim Jong-Un, suggests a possible detente following a year of increased tension and hostility on the Korean peninsula.

Both countries have the aim of eventual reunification after more than six decades of division, but what would a reunited Korean nation look like and how much would such an eventuality cost?

For the purposes of this blog, the hypothetical reunited Korea is a democratic capitalist state, with North Korea being incorporated into the Republic of Korea (South Korea).

Upon unification, the population of the Republic of Korea would jump from 51.4 million to 76.8 million, making it the 20th largest country by population, ahead of France but behind Turkey. North Korea’s population is considerably younger than that of the South, with an average age of 33.4, compared with 40.2 in South Korea. This difference would help even out the ageing population in the South and prevent any potential future pensions crisis.

A reunified Korean economy would have great potential to be one of the world’s most dominant economic powers. Reunification would give the country access to more than $6 trillion (£4.3 trillion) in natural resources, including iron, gold, and metals used to make smartphones and other technological products. The exploitation of these minerals, particularly with the new availability of cheap labour from the north, would allow Korea to produce electrical products without having to import materials from abroad. Korea, as a result, could become a technological powerhouse. 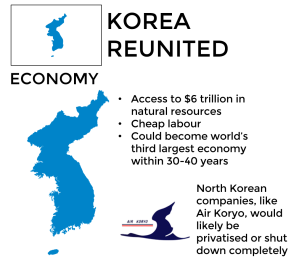 A united Korea, according to a report by Goldman Sachs in 2009, could enjoy considerable growth in GDP and surpass Germany, Japan, France and Britain within 30 to 40 years. The economy of a united Korea could total over $6 trillion by 2050.

However, it is likely that the economic divide between north and south would persist for many generations after reunification, especially as GDP per capital in the north is only 5% of that in the south. In an attempt to bridge this gap, some have suggested the introduction of a reunification tax, similar to Germany’s ‘solidarity surcharge’, to help with the huge cost of investment.

Following the reunification of Germany in 1990, the government established an agency, known as the Treuhandanstalt, to privatise or close former East German state-owned enterprises. A similar process would likely occur in a reunified Korea, but on a considerably larger scale. Millions of workers from these companies would likely be laid off and unemployment may spike in the short term; industries such as North Korea’s state-owned consumer goods, telecommunications, financial and technology companies will be no match for their competitors in the south, meaning they would almost certainly be shut down.

Upon reunification, Korea’s military spending would total over $45 billion, amounting to 2.6% of the unified country’s GDP, which is comparable to India (in terms of percent of GDP) and the United Kingdom (in terms of money spent).

The new Korea would have an active military of almost two million, rivalling that of China. The country’s total personnel, including reserves and paramilitary forces, would amount to more than 15 million, more than seven times that of the United States. Korea would also have a nuclear arsenal of between 13 and 60 weapons and control one of the most sophisticated cyberwarfare agencies in the world, Bureau 121 – the same agency responsible for hacking Sony Pictures in 2014 and the WannaCry ransomware attack in May 2017.

It is likely that, with no immediate threat posed to the reunified Korea, military spending would be cut back and money instead invested on other domestic projects, particularly infrastructure projects for the north. It’s also fair to expect that nuclear weapons programme inherited from North Korea would cease and their weapons dismantled. This would make Korea the second country to have ever given up their nuclear weapons voluntarily, after South Africa in 1989.

Life expectancy for the newly reunified Korea would differ greatly depending on whether you lived in the north or the south immediately after reunification. South Koreans can, on average, expect to live almost 12 years longer than their northern neighbours.

In addition, more than 10% of North Koreans (over two million people) suffer from malnutrition. Undernourishment is such a major issue that North Koreans are actually three to eight centimetres shorter than South Koreans.

Korea would likely appeal to the international community in the short-term to get urgent medical supplies and aid to those in the north.

Korea would be starkly divided along cultural lines. Following more than sixty years of division, the two countries have become complete opposites of one another. Whilst South Korea is a bustling, prosperous and globalised nation, boasting the latest technology and consumer goods and attracting visitors from around the world, North Korea is isolated and impoverished, with their citizens experiencing extreme hardship. The difference is clear even from satellite images of the Korean peninsula, with the north almost completely in the dark.

In addition, although the two countries share a common language, dialects on either side of the border have diverged significantly, which would likely cause issues in the reunified Korea.

As well as this, the new Korea would face the biggest task to remove a society of remnants of a totalitarian regime since denazification. The country would have the unenviable task of determining how to prosecute those involved in the Kim regime and how to re-educate the population who have been isolated from the rest of the would and have been indoctrinated with North Korea’s Juche ideology. The reunited Korea would also have to shut down the numerous North Korean prison camps and liberate the almost 200,000 people incarcerated in them.

Learning the lessons from post-WWII, technical experts and teachers would likely be kept employed (subject to easy dismissal) to help improve living standards and re-educate the public. Road signs would be changed, monuments destroyed and the demilitarised zone (DMZ), once the world’s most heavily defended border, opened for the first time since the Korean War.

Reunification would almost certainly necessitate the creation of a new constitution, which would likely be very similar to South Korea’s current constitution. As a lot of North Korean life is unknown due to the isolated nature of the Kim regime, it will be hard to know until reunification is underway what norms from the north should be permitted in the new Korea.

For example, South Korea does not allow the use of cannabis and purchase of the drug can result in jail time and a fine. However, there have been conflicting reports that marijuana is effectively legal in North Korea. Should this prove to be true, a reunified Korea would have to strongly consider liberalising its drug laws.

If the example of Germany is anything to go by, elections in the new Korea would likely take place shortly after reunification – the first of their kind across the entire peninsula. Currently, South Korea elects 300 members to its National Assembly – this number would surely rise after the inclusion of another 25 million people.

It’s possible that some parts of the former North Korea would support left-leaning political parties in elections, as has been the case in eastern Germany since reunification. This could potentially give the Democratic Party of Korea a boost in support, or (like in Germany) a new party may emerge from the dictatorial Workers’ Party of Korea from the north. The latter option is possibly unlikely to happen, however, due to South Korea’s National Security Act which prohibits actions supporting North Korea’s regime or communism more generally. 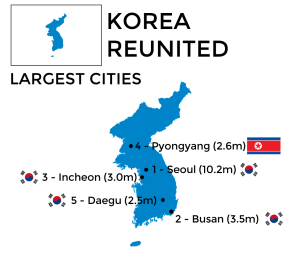 Another alternative could be that north Koreans, as they are more ethnically homogeneous than their southern counterparts and perhaps resenting communist rule, could instead support far-right groups promoting Korean ethnic nationalism, similar to how the far-right Alternative for Germany have attracted more support in eastern Germany than the west.

Seoul, the current capital of South Korea, home to over ten million people and one of the world’s most economically powerful cities, would likely serve as the nation’s capital. Of the country’s largest twenty cities, only three would be located north of the former border – Pyongyang (the capital of the former North Korea), Hamhung and Chongjin.

Although there are great potential financial benefits to reunification, a reunified Korea would face unprecedented costs in the short term to improve living standards in the north. The cost would far outweigh that of German reunification; the North Korean economy is in a far worse state than that of East Germany in 1990 and their population is half that of South Korea’s (the GDR’s population was only one third of West Germany’s).

In order to try and come close to bridging the gap in standards of living, billions would need to be spend to improve housing and living conditions, provide immediate and sustained medical services to the population in the north (who would likely require medical help in the short term), electricity and internet, roads and railways, and improvements to agriculture (as poor farming techniques have left many areas inarable). 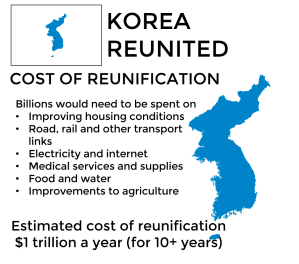 In 2013, South Korea’s Ministry of Strategy and Finance estimated initial costs of reunification to amount to seven percent of current GDP every year for more than a decade – equivalent to $1 trillion. Other analysts have projected that the cost could be even higher than this, approaching $2 trillion.

As well as this, the high standard of living in the south could provoke many of those living in the north to head across the former border in such of a better life. Such an extreme level of migration would place extreme pressure on services already stretched dealing with improving living conditions in the north. This could cause the country to go into a period of economic stagnation or even collapse, which would have a knock-on impact on the global economy. Economic collapse could even trigger political instability, with the potential emergence of extremist groups sympathetic to the former Kim regime.

In short, although a reunified Korea could be incredibly prosperous, the legacy of over half a century of division would still remain and cause continuous issues generations after reunification is achieved. In addition, any effort to reunify would need financial support from the international community as well as help delivering food, medical supplies and creating infrastructure for those in the north to prevent a humanitarian crisis.

The costs would be great, but the rewards of removing one of the last ugly remnants of the Cold War are equally enormous.

One thought on “What would Korean reunification look like?”