Angela Merkel and her centre-right Christian Democratic Union is now on course to form a fourth government with the Social Democrats after members of the centre-left party voted 66% in favour of the arrangement.

The two parties, along with the CDU’s Bavarian sister party, will re-enter a grand coalition government that started in 2013, after no party could form a government.

On Twitter, Merkel congraulated the SPD on their decision and said that she “looks forward to continuing to work for the good of our country”. 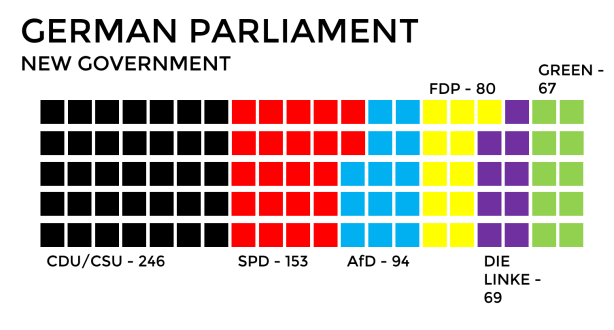 The new grand coalition means that the far-right Alternative for Germany (AfD) is now the official opposition party in the Bundestag.

The news comes after five months of Angela Merkel’s CDU attempting to form a government, with talks with the centrist Free Democratic Party (FDP) and the centre-left Green parties collapsing towards the end of last year.

As part of the new coalition agreement, the finance minister will be a Social Democrat – a significant price to pay for continuing the grand coalition by Merkel.

Many had expressed concern at the SPD re-entering government with the CDU and CSU, claiming that their poor election performance in last year’s election – the worst in its history – resulted from their time in coalition with them.

Recent polling by YouGov, published last month, showed that the German people may not approve of the SPD’s decision to continue the grand coalition; polls show the party tied with the AfD with 16%.

The SPD had originally ruled out a continuation of a grand coalition under Martin Schultz, with Thomas Oppermann, then leader of the party in the Bundestag, calling the 2017 result “a rejection of the grand coalition” and adding: “The place of the SPD is in opposition”.

The German parliament is set to vote on Merkel as Chancellor on March 14.