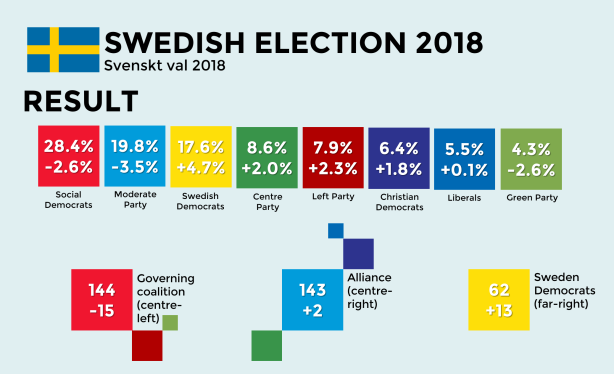 The far-right Sweden Democrats have failed to become the largest opposition party, in an election which went down to the wire.

The anti-immigration party made significant gains at the expense of the two main political parties, but failed to meet expectations that they would become the second or even the largest party in Swedish politics.

Meanwhile, it was a tough night for the Social Democrats, who suffered their worst electoral result since 1908. Their coalition partners, the Green Party, were almost knocked out of parliament altogether following a series of scandals, winning only 4.4% of the vote.

The Moderate Party, the largest centre-right party, also performed badly and fell below 20% for the first time in 30 years.

Voter streams of #SwedenDemocrats show that they held on to almost all its 2014 voters and won almost exclusively, and equally, from center left S and center right M. Particularly painful for M, which was in opposition to S-led govt #val2018 #Valet2018 #SwedenElection #INTL4335 pic.twitter.com/k15blzsTJK

In contrast, the other parties that make up the right-wing Alliance bloc made gains, with the Centre Party and Christian Democrats both increasing their vote share by around two percent.

The Left Party also made gains, reaching 7.9%. However, this fell short of the 10% that they had been polling at prior to the election.

A record 41% of Swedish voters have switched parties since the last election, according to exit polls conducted by Swedish Television, the public-service broadcaster. #val2018 #SwedenElection

In a speech earlier this evening, Prime Minister and Social Democrat leader Stefan Löfven signalled his intention to reach out to members of the Alliance bloc to govern and said: “This night should be the death of bloc politics”.

However, Moderate Party leader Ulf Kristersson has called on Löfven to resign and allow the Alliance bloc to form a new government.

Despite the somewhat disappointing result for the Sweden Democrats, party leader Jimmie Åkesson reaffirmed their wish to be act as kingmakers for the next government. “We see that we are this election’s winners, and as we move towards a new government we intend to ensure we have real influence over Swedish politics”, he said.

With almost all the votes counted, the result puts the two political blocs, the Alliance and the governing coalition (including the Left Party) on an almost equal footing with 144 seats to 143, with the Sweden Democrats on 62. 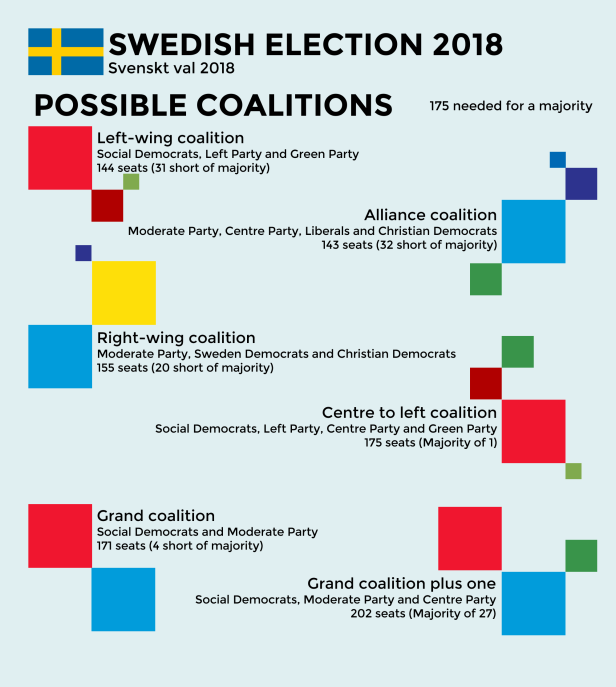