Abbots Langley is set to shift constituencies from Watford to St Albans under proposed boundary changes.

In the changes put forward to Parliament this week, the entire Abbots Langley and Bedmond ward would be part of a larger St Albans constituency, alongside Leavesden and Woodside. 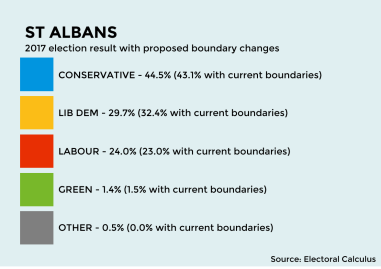 St Albans MP Anne Main would likely see her majority increase by more than 2,000 should the changes be passed.

As well as losing voters to St Albans, Watford will also see Gade Valley move into Hemel Hempstead constituency. However, Watford is set to gain South Oxhey, and the rest of Oxhey Hall and Hayling and Carpenders Park wards.

With most of these being Conservative voting wards, Watford would have been a Labour marginal at the last election if these boundaries had been in place.

Kings Langley will be unaffected and remain part of Hemel Hempstead constituency, which would see Conservative Mike Penning elected with a slightly reduced majority.

The boundary changes are part of a regular review of constituencies and an effort to reduce the number of seats in parliament from 650 to 600.

If last year’s election had been fought with the new proposed constituencies, the Conservatives would have achieved a majority of seven, with 308 seats.

Labour would have won 232 seats, with the Liberal Democrats on only seven.

It is currently unclear whether the boundary changes will be approved by Parliament, as many high-profile Conservatives could see their seats disappear or become marginals to Labour, including Boris Johnson, Priti Patel and Iain Duncan Smith, all outspoken Brexiteers.

Leader of the Labour Party Jeremy Corbyn would also see his seat disappear under the proposals.

A full map of the proposed changes in England can be found on the Boundary Commission’s website.